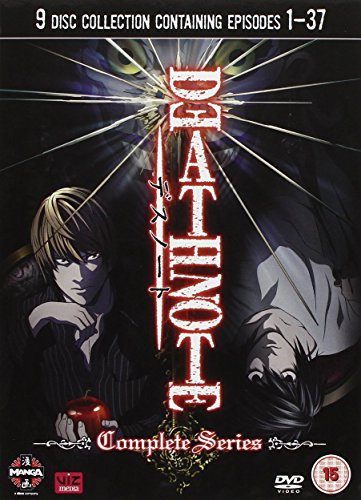 Please note this is a region 2 DVD and will require a region 2 or region free DVD player in order to play.

Light Yagami is an ace student with great prospects, who’s bored out of his mind. One day he finds the “Death Note”: a notebook from the realm of the Death Gods, with the power to kill people in any way he desires. With the Death Note in hand, Light decides to create his perfect world, without crime or criminals. However, when criminals start dropping dead one by one, the authorites send the legendary detective L to track down the killer, and a battle of wits, deception and logic ensues…

For the first time ever, all 37 episodes of the epic Death Note series are collected in one deluxe 9 disc box set featuring the original Japanese artwork.

On Blu-ray for the first time! Collected across 6 discs containing all 37 episodes of the hit anime series plus the bonus Death Note: Relight OVAs in an exclusive collectors edition rigid box packaging.

Light Yagami is a genius high school student who is about to learn about life through a book of death. When a bored shinigami, God of Death, named Ryuk drops a black notepad called a Death Note, Light receives power over life and death with the stroke of a pen. Determined to use this dark gift for the best, Light sets out to rid the world of evil… namely the people he believes to be evil.

Should anyone hold such power?

The consequences of Light s actions will set the world ablaze.