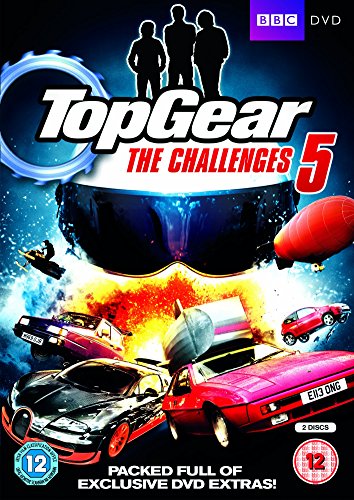 Please note this is a region 2 DVD and will require a region 2 or region free DVD player in order to play.Allow us to present yet another Challenges Bonanza crammed with volcanoes, World speed records, flying caravans, unstable Reliant Robins, jaw dropping races and cars exploding all over the place. No other programme offers so much, for so little of your I.Q.MotorhomesThe motorhome has been with us for many years, but Jeremy, Richard and James are convinced they can do better. As this cliff-hanger of a film proves, they really can’t.The Making Of The Car AdvertVolkswagen are renowned for making the best car ads in the world. Jeremy and James are convinced they can do better. As these hilarious but hopeless attempts for the Scirocco prove, they really can’t.British Sports CarsIn a surprisingly poignant film, the boys fire up three British sports cars and set out on a nostalgic road trip to look at what happened to our once great sports car industry.Cheap Saloons In GermanyA cut price road trip across Europe’s engineering heartland, involving a hairy high speed autobahn run, the industry standard Oompah Band test, and a terrifying encounter with Das German Stig.The Dakar Car Versus The SnowmobilesIn one of the most spectacular Top Gear challenges ever, Richard, at the wheel of a fearsome Dakar car, takes on some crack Swedish snowmobile racers in a race across a ski resort.Topsy Turvy Reliant RobinsJeremy sets out on an epic quest to get from Sheffield to Rotherham in a Reliant Robin that likes to fall over. Loads of “A” List northerners pop up in this crashtastic film, described by Harry Enfield as “quite funny.”The Veyron In HyperdriveBugatti unveils a new Veyron designed to be the fastest production car in the entire world. Only one man can take it to the max: Captain James T. Slow.Airport Vehicles RaceAirports are just too slow. To solve the problem, Hammond organises a grid full of airport vehicles, fills them with mad Touring Car drivers, and a race of epic an