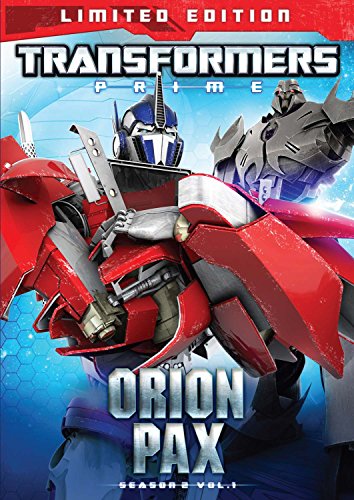 This limited edition release includes a transformers figure and 8 Topps trading cards. 7 action packed episodes: Orion Pax part 1, 2 and 3, Operation Bumblebee part 1 and 2, Loose Cannons and Crossfire. When Optimus’s memory is erased, the sinister Megatron manipulates him into joining the Decepticons. Jack and Arcee travel to Cybertron to find the legendary super-computer Vector Sigma and the Autobots devise a risky plan to get their leader back. From Hasbro studios and the writing team behind the mega-blockbuster Transformers feature films comes an all-new series of stunning, computer-animated adventures for Optimus Prime and his team of Autobots as they battle against their nemeses the Decepticons and their villainous leader Megatron. Includes Transformers Figure and a pack of 8 Topps trading cards